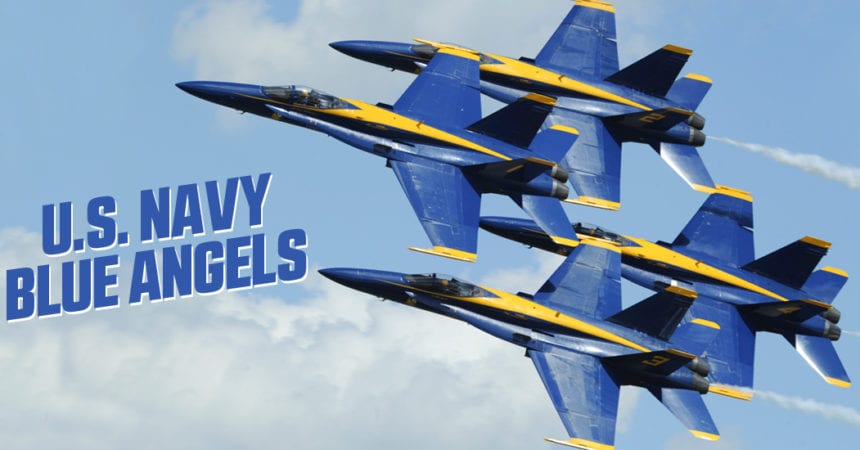 The Blue Angels typically perform aerial displays annually in at least 60 shows at 30 locations throughout the United States and two shows at one location in Canada. The “Blues” still employ many of the same practices and techniques used in the inaugural 1946 season. An estimated 11 million spectators view the squadron during air shows from March through November each year. Members of the Blue Angels team also visit more than 50,000 people in schools, hospitals, and community functions at air show cities. Since 1946, the Blue Angels have flown for more than 505 million spectators.

The team flies the McDonnell Douglas F/A-18 Hornet since 1986, which had served in the fleet and has been constantly being maintained and updated to be combat-ready fighter aircraft.[11] Modifications to each F/A-18 include removal of the weapons and replacement with the tank that contains smoke-oil used in demonstrations, and outfitting with the control stick spring system for more precise aircraft control input. Control sticks are tensioned with 35 pounds (16 kg) of force installed on the control stick as to allow the pilot minimal room for uncommanded movement.

The show’s narrator flies Blue Angel 7, a two-seat F/A-18D Hornet, to show sites. The Blues use this jet for backup, and to give demonstration rides to VIP civilians. Three back seats at each show are available; one of them goes to members of the press, the other two to “Key Influencers”.[12] The No. 4 slot pilot often flies the No. 7 aircraft in Friday’s “practice” shows.

The Blue Angels formerly used a United States Marine Corps Lockheed C-130T Hercules, nicknamed “Fat Albert”, for their logistics, carrying spare parts, equipment, and to carry support personnel between shows. Beginning in 1975, “Bert” was used for Jet Assisted Take Off (JATO) and short aerial demonstrations just prior to the main event at selected venues, but the JATO demonstration ended in 2009 due to dwindling supplies of rockets. “Fat Albert Airlines” flies with an all-Marine crew of three officers and five enlisted personnel. The current “Bert” (BUNO 164763) was retired from service in May 2019 with 30,000 flight hours. The Blue Angels will be replacing it with an Ex-RAF C-130J.

In August 2018, Boeing was awarded a contract to convert nine single-seat F/A-18E Super Hornets and two F/A-18F two-seaters for Blue Angels use. The converted aircraft are to be completed in 2021.

The best place to view the Blues if from the deck of one of our beautiful pontoon boats! Book Here