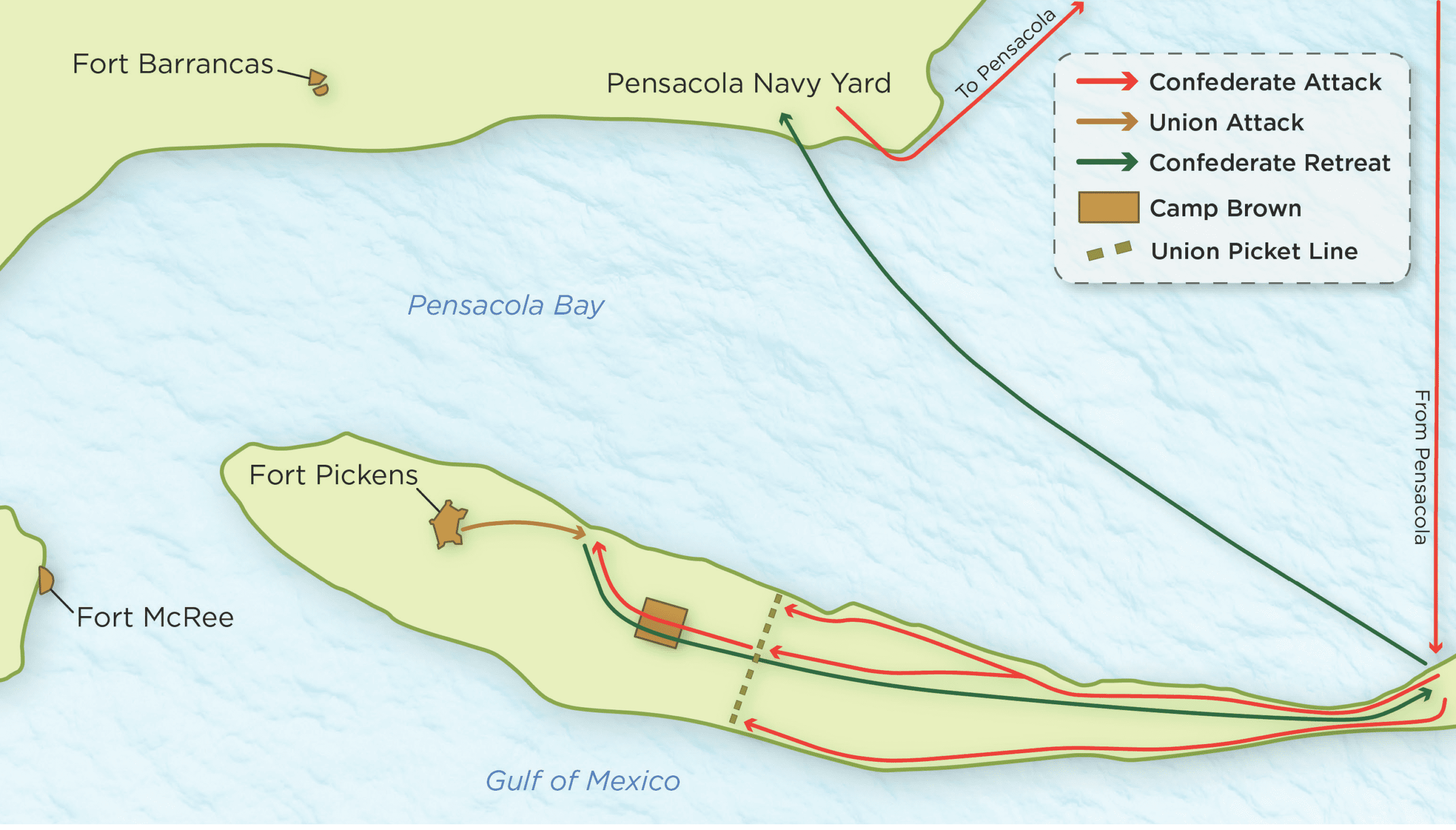 The Battle of Santa Rosa Island. Santa Rosa Island is a 40-mile barrier island in the U.S. state of Florida, thirty miles from the Alabama state border. At the western end stands Fort Pickens, which in the fall of 1861 was garrisoned by parts of the 1st, 2nd, and 5th U. S. artillery and the 3rd U.S. Infantry, under command of Col. Harvey Brown, of the 5th artillery. The 6th New York Volunteer Infantry, commanded by Col. William Wilson, was encamped outside the fort, a short distance east of it.

The Battle of Santa Rosa Island

After midnight on October 9, Brig. Gen. Richard Anderson crossed from the mainland to Santa Rosa Island with 1,200 men in two small steamers to surprise the Union camps and capture Fort Pickens. He landed on the north beach about four miles east of Fort Pickens and divided his command into three columns. After proceeding about three miles, the Confederates surprised the 6th Regiment, New York Volunteers, in its camp and routed the regiment. Gen. Anderson then adopted a defensive stance to entice the Federals to leave the fort and attack. Receiving reinforcements, Col. Harvey Brown sallied against the Confederates, who reembarked and returned to the mainland.

Unfortunately the Union loss during the Battle of Santa Rosa Island was 14 killed, 29 wounded and 24 captured or missing. General Braxton Bragg and Lieutenant Hamel, commanding the Confederate forces at Pensacola, reported their loss as “30 or 40 killed and wounded,” but a Confederate newspaper, found by Lieut. Seeley a few days after the occurrence, gave the total casualties as 175. Maj. Israel Vogdes, of the 1st artillery, was captured, and on the Confederate side Gen. Anderson was severely wounded. The camp of the 6th N. Y. was partially destroyed.

Fort Pickens is a pentagonal historic United States military fort on Santa Rosa Island in the Pensacola, Florida, area. It is named after American Revolutionary War hero Andrew Pickens. The fort was completed in 1834 and was one of the few forts in the South that remained in Union hands throughout the American Civil War. It remained in use until 1947. Fort Pickens is included within the Gulf Islands National Seashore, and as such, is administered by the National Park Service.

Pensacola Pontoons Offers Pontoons boat rentals here in Pensacola. One of the best ways to see the history of Pensacola and Fort Pickens is by water!! Book here